The Grandest Sound Ever Heard

Okay, here is the essay I wrote in 2002 about the performance I was involved in while at UMass.   Have a nice evening.   I’ve been writing all night tonight, stuff for school.  I’d like to share some of it with you sometime soon.  Anyway, here’s the essay about the BERLIOZ REQUIEM!

Hi everyone, I’d like to share this link with you.  Walter Chesnut was a major influence on me when I left home for college in 1975.  I was only 17 and I knew I had a lot of growing to do, but wow–little did I know just how much I had to learn!  Walter helped me through some rocky times and helped me get my chops in order; even when the other kids were poking fun at me, Walter still believed in me and stood by me.  I wrote an essay about the Berlioz Requiem, which we put on in 1977, I believe) which I’ll post here when I can find it.  But here’s the link to a memorial page, where you can find a Public Radio segment.  Do have a listen.

I’m getting back into running after all the injuries and weight gain and loss adventures.  So far, I can run .3 miles.  I am determined to run .4 miles tomorrow.  I am getting stronger each day.

Here’s something I wrote in 1999.  It’s based on Virginia Woolf’s essay, “Street Haunting.”

JOGGING IN THE NEIGHBORHOOD ON A SPARKLY OCTOBER MORNING

A new hairdo — Then and now

That was then!  This is now:

Have a nice day!

rough draft
I used to wear contact lenses, and even now, I dream about them at night.  They appear in the corners of rooms, in the backs of drawers, in socks, in toilet bowls, always in abundance, and they are always larger than my eyes.  Or should I say they are larger than my “I,” because they represent a lie: “No, I don’t wear glasses; I’m not one of them; I don’t have this appendage on my head that makes me look like I’ve got windows strapped to my face–no, not me!”  My “eye,” or rather, “I,” saw clearly, I had the true view, the popular view.  I was not ill.  Delusion, after all, is belief in an unpopular idea, and I was made popular now that I had contact lenses.  I was a geek no more.
However, everyone sees the world through lenses.  If one doesn’t wear glasses or contact lenses, there is the lens in one’s eye that one looks through.  We see the world through the camera lens, on TV and computer screen; as they say, one shouldn’t look for too long or too close or one may wither and go blind.
A writing teacher told me that fiction is a lie and an exaggeration.  Memoir is a big lie and exaggeration, the biggest of all, for “I” is taller than “you” or “she” or “them.”  There is no such thing as “creative nonfiction” or even “nonfiction” without lies because of the lenses we see through.
Hypergraphia is a symptom of writing ability.  Writing is a way of deciphering what we see, and rehearsing our lives.  The Bible is a work of creative nonfiction.  Someone needed to decipher what he or she saw, and needed to rehearse his or her life.  We read the book.  Religion is belief in something that cannot be scientifically proven to exist.
Delusion is belief in an unpopular idea.  Some say people with mental illnesses are simply looking through the wrong lens.  They argue, “Who is to say which is the correct lens?  Perhaps the world is topsy-turvy!”
My answer is this: Everyone looks through a lens or lenses.  A person with a mental illness wears an ill-fitting lens, a lens that hurts.  Perhaps the lens was scratched early on by poor handling.  The lens curvature or size could be wrong, or the lens could have dust or dirt particles on it.  A person with a mental illness may have a scratch on the cornea, on the “I,” that only time and patience will heal; for others, a lens correction is necessary.  Mental illness isn’t an alternative.  There may be more than one way to see things, but if the lens hurts, I want my money back.

Yes, I was up all night.  I’m trying to prepare for the Grand Dog Sweater Fashion Show I’m going to put on for you guys on video, when I finally get my computer’s act together.  Nearly crashed it trying to get the right software to create the kind of file necessary for the video, but a quick “Disk Cleanup” saved the machine, sometime this morning.

Posted in News about Me

A Poem for Joe

I know it’s late.  I’ve been spending money all day, and tonight it seems to be coming to a head.  Like I bought two pairs of headphones today.  I kid you not.

Here’s a poem I wrote for Joe in 2002.  I would have given it to him, but he never read anything I wrote for him.  He’d just glance at it, set it aside, and say, “I’ll read it later, after the game,” whether there was a game on or not. 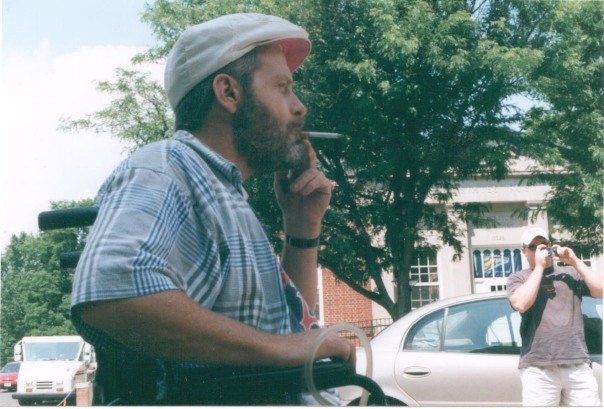 (Originally, there was a sound file here, that was lost in transfer.)

Here’s the print version:
For Joe

On the sidewalk, a teen whittles
an oak branch, perfectly crafted.
Looking at each other, we laugh:

How on earth did we get here?
It’s always the same spine,
the same sad whisper.
Our cheeks crease unnoticed,
our hair, our rumps follow….

The boy’s jackknife flashes;
he mounts, rides off, waving.
Earth abandons her poles;
time, that trickster, disguised as delicacy,
draws us as close as two muscles
intertwined in the same perfect limb–
an item saved, a given.

Let us pick life off the bones,
meat falling into our laps.
We are still hungry.
We lick our fingers like children;
(blood, sweat, urine,
a forgotten dose….)
the inner skull unfolds,
a flood of innumerable pages.

Our oneness always new, embryonic–
no need to plagiarize–
moving together like tectonic plates,
we hug the earth, each other–the rest is redundant–
we have dreamed of this, all our lives.

I’ve decided to do a complete rewrite of my QB chapter.  I’m starting it at a point a few weeks after his death, on Thanksgiving.  I’m remembering some stuff I learned in a workshop when I was at school (when I went to Port Townsend) that a story should start at the last possible moment.

Then perhaps a story about madness should begin at the point at which a person is about to go mad.

For the first time.

Firsts and lasts are interesting.  Middles less so.

Here’s what I wrote:

[Sorry, sound file has been lost in transfer]

Posted in Ramblings and Blog Essays

Good morning to everyone

I’ve received all kinds of complaints about the new format!  Many apologies to those of you who are having trouble.  If you view my blog entries via e-mail, try clicking on “Go to today’s blog entry,” which can be found in the sidebar on the right part of the screen.  This will take you to the web, where you can view my blog in your web browser.  That should clear thngs up.

Here is a photo to cheer you up.